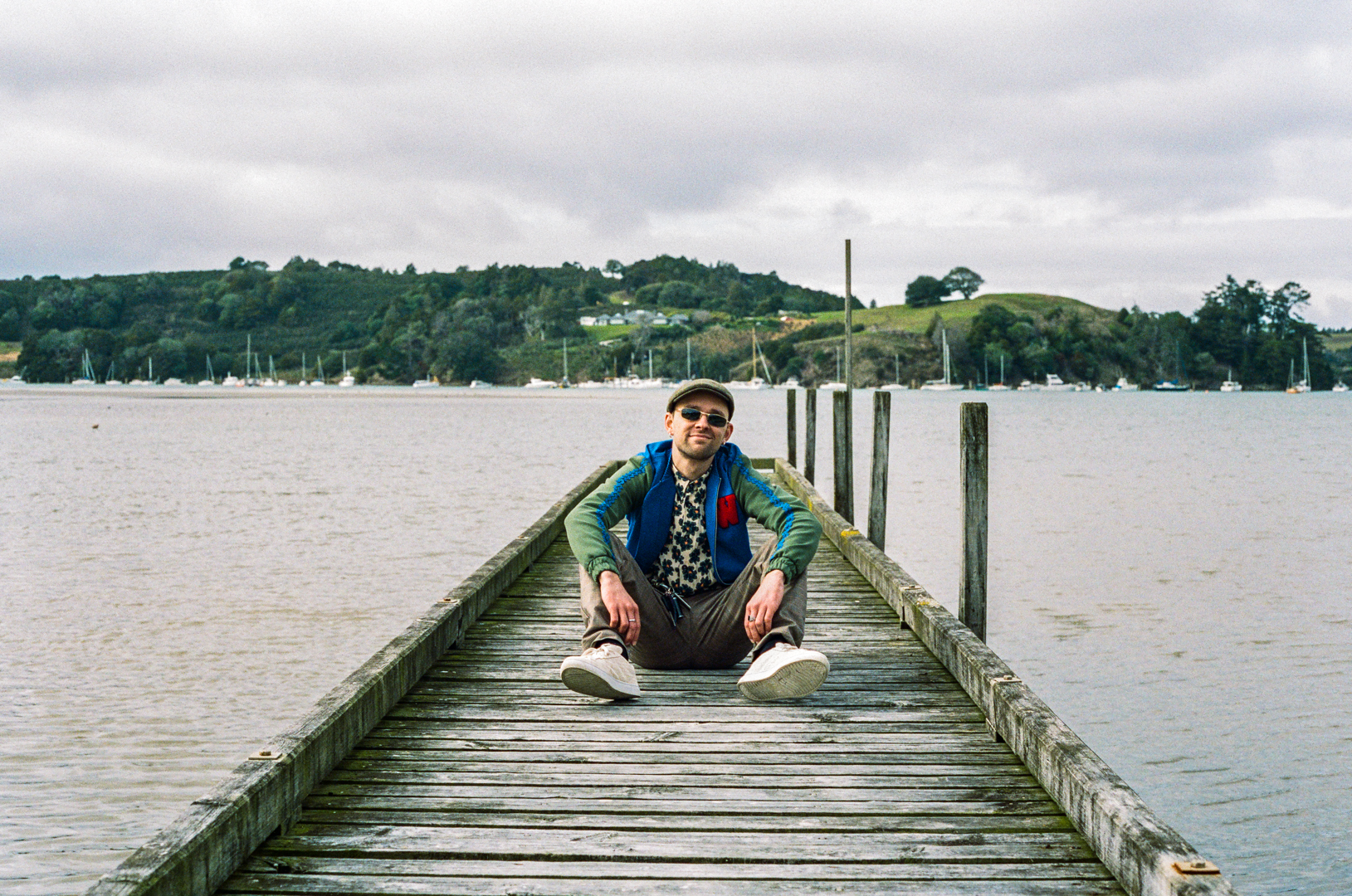 I grew up in Mahurangi, just north of Tāmaki. It has developed so much since I was a kid, there’s markets and cinemas and all sorts now. But when I was growing up it was just a boat yard and a four square.

There was always music around when I was growing up! My parents listened to a lot of Aotearoa artists, a stand out was definitely the Nesian Mystik album, “Polysaturated.” I don’t remember ever making the connection as a kid that these guys were from Aotearoa. Same with Dave Dobbyn, Bic Runga etc. We listened to them a lot, but at that point I didn’t really draw the connection to NZ, they were just great musicians. That’s kinda cool in a way.

It wasn’t until I was a bit older that I made that connection. By that point I was listening to Home Brew’s projects front to back. I hadn’t heard someone speak so clearly and vulnerable before. That was huge for me as I went through my late teens.

While I was homeschooled we all played instruments. I was introduced to a much wider array of music in that time period. My older cousin and another homeschool friend understood the internet and how to get on limewire. So they used to make me mix CDs which was super dope. I came back to public school around year 9, and by that time I was really getting into skateboarding. I kinda didn’t have the access to music in that period of High School, partially by choice and partially because of what the school valued as “music.”

I went to Uni, but I didn’t study music. I studied in a course called Creative Technologies. It was almost like a Fine Arts degree with emerging tech as the paintbrush. We worked on Virtual Reality, Robotics, Gaming and everything in between. I focussed a lot of my energy at Uni into getting better at producing music and editing video. It wasn’t the intention going in, but that really drove my passion for music.

Currently I stay in Te Pito o Tāmaki, Central AKL. I’m lucky enough to be a part of an amazing creative community called Poynton Studios just off of Karangahape Road. My creative brother Benji Taylor and I started our studio back in January of 2020, and it's grown into the most beautiful family. That’s where I spend my days making music and video.‍

How would you describe your local music scene?‍

Thriving! Evolving and defining. I know there is still so much to fix within the Tāmaki music scene, the old needs to make way for the new, spaces need to continue to become safer for everyone. But the music itself is explosive, it’s original! I believe we are in the Renaissance right now.

I think for the most part everyone is very supportive of each other, we all understand that we are in the same waka together. But that’s not consistent across the board, some people still believe there isn’t enough to go around. But I really believe that is changing. It’s part of the explosive evolution that’s happening right now, people are more excited to share and support each other.

Right now feels incredibly special to me. I’ve never felt so close to myself, so proud of what we are doing. This EP (PLUTO) has almost been the documentation of a very pivotal point in my life where I’ve learned to love myself. That’s super special to me.‍

Over the past few years have you played on any big stages/festivals and/or been featured in any of NZs major media outlets?‍

I played Rhythm and Vines a few years ago, but I haven’t been playing shows for a while as a choice. It felt important to take the time to write some music that really mattered to me. We are just gearing up into live music again now.

I’ve had a few chances to talk to major media over the last couple of years, recently I went up to ZM and had a chat & I’ve been featured in the NZ Herald a few times. I'm super grateful for those experiences, but I gotta give love to the underground media putting in the work too! I feel like they have shown me so much support over the years, and I wouldn't be where I am without them.‍

What do you write your songs about? & what is your process from beginning to end?‍

Mostly my songs are written as a melody first. I find where I want the words to sit and then the lyrics come naturally after that. It could be what I’m going through at that very moment, as simple as a feeling or even something more fictitious for fun. I write hundreds of songs, and only really release a handful. That keeps it playful and free, it means I can be anyone I want to be on the track. The songs are more for me than anyone else.

I start with the instrumentals. Sometimes that’s writing the beat, other times I just play keys until I like a chord progression. From there I sing nonsense into the mic until the melody and flow feels right, and then I tend to flesh out the lyrics from there. Then if I love the demo, I take it to the band and we look at recording it together.

If I put out every song I liked I think it would be way too difficult for listeners to find what they are looking for haha. Most of the demos I write lyrics for have already passed the test, and I just listen to them in the car over and over. I think I’ve learnt that good things take time. So I usually sit on things for a few months, and keep writing new stuff. And then if a song is still exciting to me a few months down the line, I know it’s a good one. ‍

The first would probably be to just trust the process! There’s a million and one ways that you can (and will) evolve, and barely any of them come along because you force them to. The world runs on happy accidents, and all you have to do is be prepared to catch a coincidence as it passes by. I think if I had known that I would have been a lot happier and grateful.

The second is that you’ll know when you find your people. I spent a lot of time trying to fit into other identities within the music scene, trying to cater to others because I felt alone. But with time you meet the people that bring out the best in you, and vice versa.