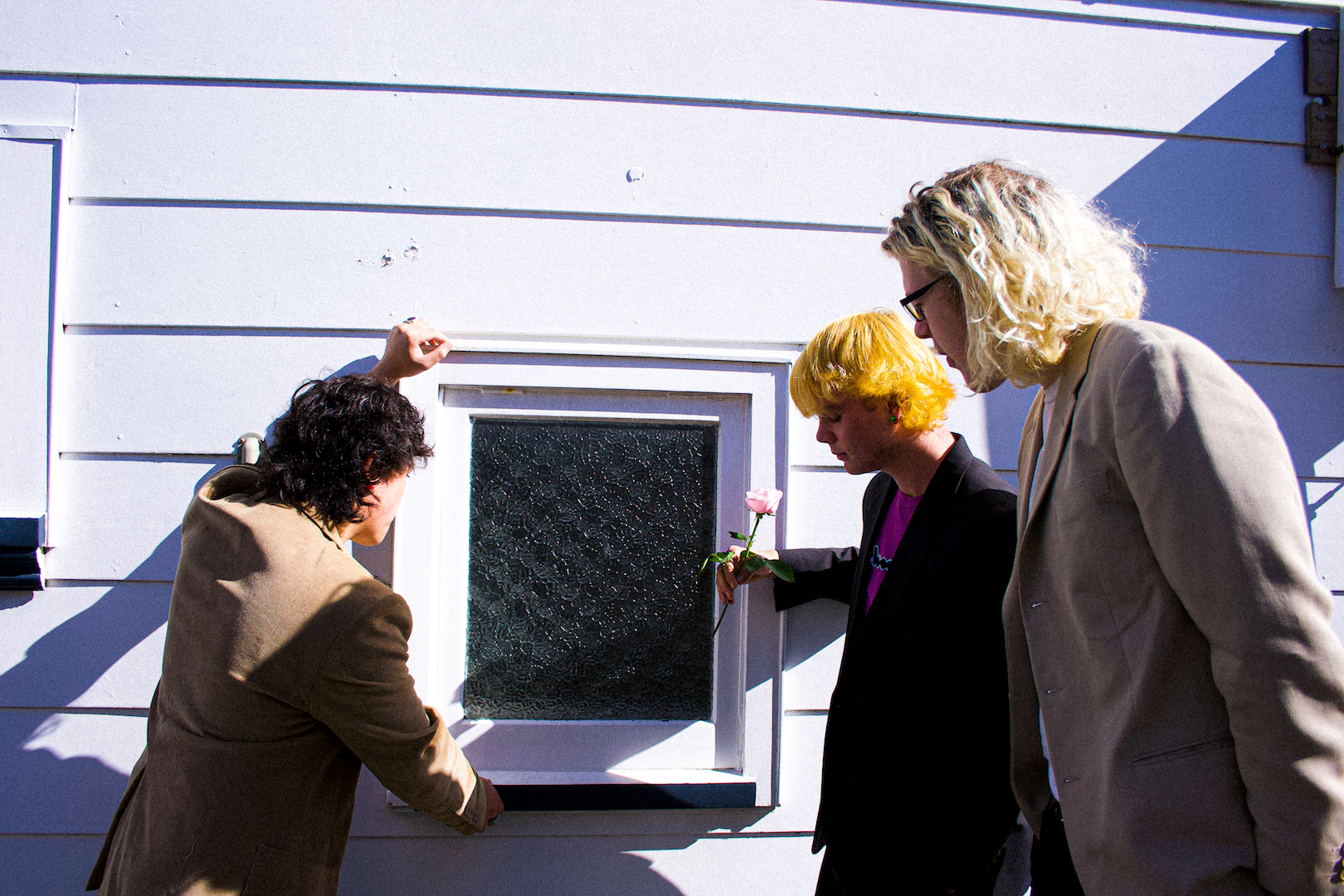 We were all born in different places, Harrison in Masterton, Tyrone in Invercargill, and myself in Athens, Greece. Our families had all moved to Queenstown when we were very young, though, and we all met during preschool.

I don't come from a musical family at all - as far as I know, but my parents are big music listeners with pretty different tastes; I got a generous helping of Red Hot Chili Peppers, Nirvana, The Beatles, and David Bowie from them.

I started playing music in year nine, and then before I knew it, I was obsessed -- I've never looked back. Honestly, I consider our school in Queenstown (Wakatipu High School) to be an unsung hero when it comes to music. A bunch of amazing acts came through the school just before we did -  like Mild Orange, The Shambles, Three Quarter Marathon, and Sofia Machray, and Holly Arrowsmith... we had so much to look up to! I think the people around me during that time were what got me so invested.

With Dunedin being the closest city to Queenstown, during high school we all got pretty wrapped up in the scene there. I listened to a lot of bands like Marlins Dreaming and Soaked Oats, and there were a few times that we'd go in groups to see acts perform in Dunedin. That was our first exposure to live performance in a local scene, but I'm not gonna lie, it felt pretty sad having to go to gigs with parents while we were under 18... there are some advantages to getting older, after all.

Smokefreerockquest was a pretty big deal within the arts community at our school; Haven took part four times, from year 10 to year 13. The first year we entered, we won the Central Otago regional final -- BIG surprise for us. In all honesty, none of us think we were the best band that night, but it was kind of like a turning point for Haven; we felt like we could actually achieve things from then onwards. Flash-forward to 2019 and 2020, and we were in the national finals!

We met so many important and rad people, and Harrison and I got to go on our first plane trip together to the big city. Bless. We were speechless about coming second both times, and it felt like all those years of practicing and hanging out throughout high school had finally paid off. We never got to compete in Smokefreerockquest with Tyrone because he joined us at the end of 2019 and then graduated shortly after, but he competed solo in that year - and I'm pretty sure his submission video is still on YouTube! Check it out, he's a talented, talented lad and I love him.

What has been your journey with music after high school?

We are all based in Wellington now. Tyrone and I study a music industry course at Massey University, and Harrison is working full time.

The music scene here is way bigger than Queenstown's -- that's for sure. There's so much happening all the time, and there are multiple gigs a week we can go to; it's an amazing city to live in. I'd say the scene doesn't really have a specific sound that everyone conforms to, which for me is the best part.

We're learning a lot here and having a great time, but I'd say that the band still comes first for us.

We've been working hard to get amongst the scene and branch out, as well as recording some new music which is super exciting!

Over the past few years you have played some great shows, are there any moments in your musical journey so far that stand out as particularly special?

We love playing just about any show, but I think a standout moment for me was playing the Gibbston Valley Concert in January, this year. There were some big names on the bill like Gin Wigmore and Dragon, plus around 10,000 people in attendance. It was SO exciting, but also suuuper nerve-wracking. At the end of the day we'd had a great time playing and received what felt like VIP treatment, ahhh memories.

What do you write your songs about?

Lately, I've found the best way of writing songs is becoming completely honest. I find myself using the notes app on my phone to record my experiences, even though they might seem boring (for example, "I drank four cups of tea this morning"). And yeah, that sentence is super uninteresting, but I feel like I enjoy trying to make mundane things gripping, or emotional, or funny. So yeah, I'd say nowadays, Haven's lyrics are written with a storytelling approach, which honestly makes sense 'cause I've been obsessed with music from artists like Stella Donnelly and Phoebe Bridgers for a couple of years now.

When writing music I like to start with some foundational chords, so I'm often just sitting with a guitar for a few hours playing random shapes until something sticks. Then, I'll awkwardly sing over it, desperately trying to make a hook. I WISH I could make it sound glamorous, but honestly, I like to songwrite alone so that friends/flatmates/family can't hear me separating the bad ideas from the good (it takes a while before I'm settled).

After that, I'll scroll through my notes to find some lyrical content, and I'll try to focus the entire song around one chosen concept or lyric from there.

I then work out basslines for the tune because that's what I'll actually be playing with the band, and I'll show the song to Tyrone and Harrison... and we're off!

Tyrone also writes and sings songs in Haven, but I couldn't tell you his process. If I knew, I'd have copied it years ago... We have a cool dynamic in the band: I think Tyrone writes the coolest songs ever, and he thinks that of me. I find it helps us push forward, we're always trying to outdo one another, but in a healthy way. That's super important to me.

Studio time is still pretty scarce for us at this point in time, so, I'd say that we prioritize the songs that get the best reaction in a live setting. Although, it's not the ultimate factor. Of course, if we're all super passionate about a specific song, then we'll record it. I love working in the studio with the boys; it's so much fun seeing these songs that we've been playing together as a three-piece band come into fruition with added instruments and all that fun flashy stuff.

I think one of the biggest things I've learned is how important it is to be good mates with those who you work with. Playing music can only go so deep, you've gotta hang out, go out for some food, watch movies, go on walks... whatever you all like, as long as it's together. Haven were friends before they were a band, and I think that's one of our biggest strengths.

Also, I don't think I realised how important it is to put yourself out there until quite recently. In many senses, I think you've gotta be your own biggest fan, and then people around you will follow suit. It could take some time, though, and that's why I'd tell young Ryan to be patient. Nothing's gonna happen overnight. Take each day at a time, relax a little, drink plenty of water, and hang in there, champ.