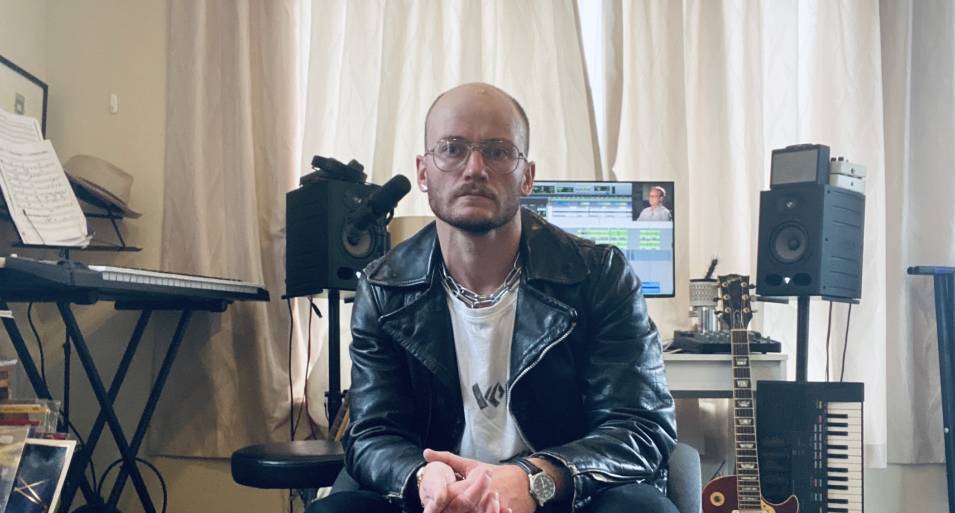 I grew up in Waiuku, South Auckland. Growing up there was music around me, for sure. My family didn't play instruments, really, but my Dad was a big record fan, and would consistently play albums that I still enjoy these days. We had a neighbour who had a cheap casio keyboard, and after bashing on that enough times as a 8 year old, I think Mum decided sending me for lessons might be beneficial to both households.

In high school I participated in Smokefreerockquest, and I remember being terrified. We convinced someone's Dad to film it, and I pray that video never finds the internet. We were SO determined to just play our parts well, we never once practiced being 'onstage', or all facing one way, or how to move and enjoy that performance space. I think that, for lots of us, it's unnatural to be onstage, and it only comes with practice! Playing for friends (or at school etc) and getting used to 'performing' is something I would really recommend to any young musician. Finding a fun, relaxed, way to perform in front of people gives you learning that you can only get from actually doing it! You don’t want your first time performing your songs in front of other people to be on the Smokefreerockquest stage or in an exam or recital. Practicing in an environment with less pressure makes it easier to get creative and try out different things. I will say, however, throwing a guitar is an expensive mistake!

After playing in high school, I have had some great opportunities and experiences playing as a part of a huge range of different projects. My creative output has got a weird cycle to it really. I started playing pop-punk and indie stuff in high school, fell into a long period of jazz and blues guitar through university, and now, 10 years later, I mostly play pop, pop-punk, and indie guitar stuff.

One moment that stands out, in particular, was in 2019 when I was asked to perform with Mitch James  as part of the Arohanui concert series at Spark Arena, a fundraising project for the victims of the Christchurch shooting. My performance was actually pretty awful, and I had so many technical issues, but I am still so proud to have been involved. The atmosphere in the arenas was entirely sensitive and melancholic and there was a sense of defiance, in singing and dancing with so many hurting hearts.

The writing of songs, for me, is different for each project (and even each song). For my own things, I typically snag a lyric line or melody that I can imagine, and then go and piece out a guitar accompaniment, and then it all comes at once. A bassline idea, some really rough programmed drums, and quick vocals. The demo then just becomes a reference when I get into a room with some friends, and I love when they bring their own ideas to it. I really think it’s important not to be too precious with songs. Life's too short.

When working on music in a group (for instance with BEACHWARE - a band I have been a part of since its conception in 2018 (?) ) it's' a little more considered. Rob, our vocalist who does a lot of our writing, typically provides a hook and early vocals, and I'll slowly expand that into something more complete. I have a tendency to 'overcook' our demos, so there'll be a lot of keys, percussion, vocal dubs and guitars, before we feel like a song is written. More recently, we then collaborate with really experienced songwriters to get feedback and to really trim these ideas down. I think this is a good part of the process. In the pop/indie pop world, there's no time to waste with your audience. I think everything has to have a reason to make the final edit. And that's HARD, so having another pair of ears, who might be more inclined to chop ideas out, is really helpful.

When releasing singles, my advice (and what I try to do with my projects) is to go with your 'strongest'. Which can mean a lot of different things, but I don't believe in putting stuff out for the sake of appearing 'busy' or 'active'. Really go in blind and try to determine which song might capture a new listener, or reward an old one. The 'radio single' isn't so critical in 2021, but I think you still want to turn up to your blind date with a nice shirt on, if you know what I mean.

I am always learning. I guess some takeaways would be:

Firstly, There's no rules anymore. Nothing matters. You can do it on your own, if that’s what you want to do. What I mean is, I think there used to be a real expected process - that you record an EP or album, you tour a single or two, you release the record with a whole publicity plan, you tour again and then you rinse and repeat. But the music industry is always evolving, and always playing catchup to those who recognise the newest ways to reach an audience.... A great example of that is how some acts, such as Benee, have found great success through Tik Tok this past year.  Another example is called a ‘sync’, where a song gets used in a video (such as youtube, a film or an ad) and a song gets attention that way. Or maybe it is an album and its tour that is your ‘break through’ moment!

So, my advice is, do what you want to do … that might be putting your songs on tiktok, or only recording singles, doing live streams from your living room every night... Doing things for your own reasons - because you want to - can take a lot of pressure off. If your aim is to put a song out because you love the song, rather than to get a million trillion streams, you’re succeeding as soon as you put it out and everything else is just a bonus.

I wish I'd never assumed I knew more than people. I've learned SO much, technically, and personally, from people I never expected. A show or a record takes so many people, they all are needed, and they ALL know something you don't. Without getting 'in the way', try asking questions. For instance, learning about technical audio routing stage stuff, and monitoring, and playback, and engineering can really improve your process down the track. And then learn about managing people's expectations, and keeping your band fed, how to make a rider, and how to play a show calmly when your keyboardist just got dumped during soundcheck (that was ME). Ego gets you nowhere... And the New Zealand music scene is way too intimate for that anyway.