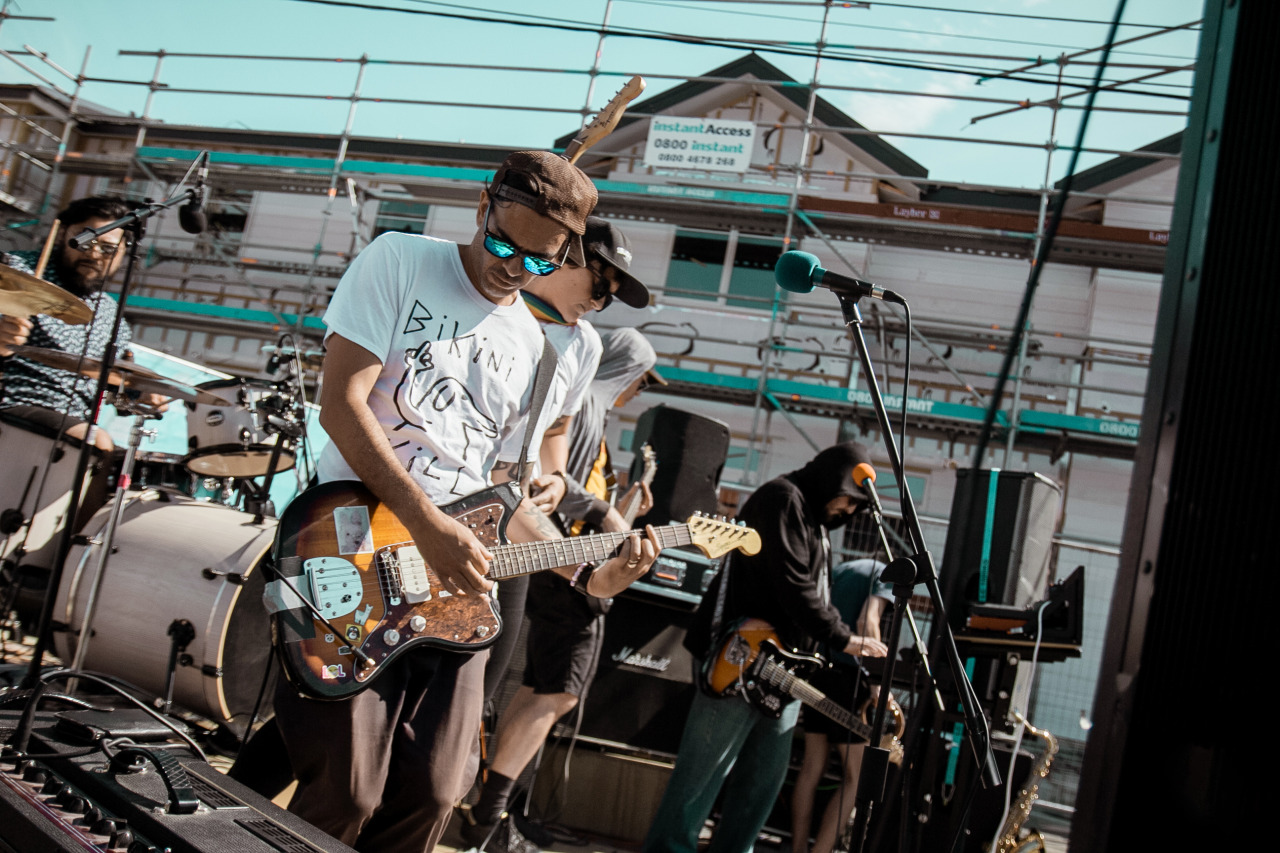 My identity as a person is firmly etched in my home town. My Tūrangawaewae, where I stand, is a little town in the Manawatū called Feilding. Although I wasn’t born here (I was born in the Wairarapa and 7 days later travelled in the Kingswood station wagon to the 323…Feilding) Feilding is my home and I am fiercely in love with it. I feel like being from Feilding, perhaps like many growing up in small provincial towns in New Zealand, we have an underdog moniker attached to us, it is probably a self-prescribed moniker…but I wear it in everything I do…and will proudly and loudly lay claim to being from Feilding whenever I get the chance.

My earliest memory of music in our house is my Father playing guitar. Every night I was treated to him playing three songs to me while I was in bed…I was so naïve, I just thought everyone’s parents played guitar to them when they went to bed. It wasn’t till later on that I realised these songs he played me weren’t covers, they were his, they were little songs he had made up to sing me to sleep. The biggest gift he gave me was a love of music at this age, his songs made me feel safe, his songs give me safety even now…I can hear the melody and remember the words and I am back safely tucked up in my bed…music that resonates with me still has this affect, It transports you, it makes you feel...something….anything.

As a pre-teen I have fond memories of the sounds of Midnight Oil, The Pretenders and Fleetwood Mac being played by my older brother whilst he tidied his bedroom behind closed doors…visits to my Big Sister's house in Wellington had me exposed to The Front Lawn, The Mutton Birds and Cowboy Junkies, but these were just sounds to me at the time…safe sounds of my siblings choosing, I still identify these bands and their songs to my siblings…but they weren’t my makeup. It wasn’t until I heard (cliché alert) Nirvana, Sonic Youth and The Pixies that I really heard the sounds that resonated deeply with me, that formed not only my identity, but my politics, my opinions…it felt like (as I am sure it has for countless others) they made music specifically for me.

I think I was 14 or 15 when I first saw the video for Suck by Loves Ugly Children, the pop melody, the quiet loud dynamics and the aggression, forgive the pun, it sucked me in…Garageland was another NZ band that I found really appealing, around the same age I saw them at The Wild Horse Saloon in Palmerston North, I was excited to see a relatively big New Zealand band from out of town play in Palmerston North…thinking now it definitively was the dynamics of those bands that I loved, the loud and quiet, the soft and aggressive, the pop and alternative.

I am still happily living in Feilding, 2 kids, a wife, a cat and a mortgage…living the dream. I am fortunate to be active in a number of bands at the moment, my main project is Polaroids of Polarbears. With Polaroids of Polarbears I feel like everything I write is purely for me, no one else…all the sounds from my musical awakening are in these songs….I play everything and record/mix in my shed…it's DIY Lo-Fi. Here is a brief list of my other active bands; Date With The Knife, Churlington, Feildings Best Dancers, Jumping The Fucking Shark & SDW.

In Palmerston North, I describe it as really easy to be a musician. In the sense of, if you want to play a gig in Palmerston North, we have a really supportive community focused venue in ‘The Stomach’. As well as an artist space called ‘Snails: Artist Run Space’ who put on gigs. Having venues that are open to musicians performing their art is a huge part of making a scene, we all have somewhere to go, we are genuinely so very lucky to have what we have here in both of these spaces.

We are a very supportive little music community in the Manawatū, the shows are often an eclectic mix of bands, which always makes for a different musical experience…it's actually something I really love about the community/live scene here…you will very very rarely have two acts that sound similar on the same stage in one night. I think perhaps for some…not all...outside bands who haven’t played in the Manawatū before it can be a bit of an experience for them…you may be the indy rock band where you’re from, but tonight in Palmy you’ll be playing with a solo singer/songwriter, whose first gig is tonight…a reggae/funk band who will get people dancing and a noise core outfit whose goal is to make everyone deaf but the 2nd song…all very different but in a weird way all very Manawatū. Because the community is so close, you will see different members from different bands all playing together…competition isn’t something that exists here…which is perfect if you are just starting out and around you there is just support.

The thing I enjoy the most about playing/creating music is the live…for lack of a better word performance…the presentation of what I have created and here it is for you to take it. Some night performing songs can be easy…I am quite emotionally connect to the presentation of music I make…so if it’s been a great day the performance could reflect that, the songs chosen, the in between song banter, the performance…and on days when life is a little heavy the presentation reflects that…I like to be honest in every part of it…I am not going to pretend to put on a “show”…I am lucky in that respect, coz I am pretty honest at the songwriting step, I can be in that moment quite quickly…if I'm down you better believe I'm going to let you all know in the song I play and how I present it to you…if Im up, you’ll get that…as an audience member…I want to see honesty in every aspect of a live performance…and as such…I need to present one when I am doing my music live.

Every stage I've been on has been exciting…from playing at Newtown Festival, to playing The Stomach in Palmerston, to playing my lounge…every space has been amazing…I think expectations play a lot on the minds of artists…if I am expecting things to be this big and they aren’t…i'm probably gonna feel a bit shit about that…I set the bar pretty low as far as others expectations…my expectation is always met if I'm able to perform…whether it be to a large group…or a small group….during lockdown I performed a live set to my phone as part of a Live To Air series that The Stomach put on…that was my favourite live performance of the last 12 months…it was DIY, fun and honest.‍

What do you write your songs about?‍

For Polaroids of Polarbears I write songs for me…I mean, I write what is going on in the basement of my brain, about what is and what isn’t going on in my life and about other people in my life…they’re songs for me…if other people relate to them then that’s fantastic…we can feel a little less alone together. Polaroids is my honest space…and I know when I am not being honest in Polaroids songs…they feel hollow…made up…pretend…which then is reflected in the live presentation...pretend.

When you're writing, what do you start with? What is your process from beginning to end?

Im pretty “organic” with my music writing…I normally sit on the couch with the guitar and mindlessly strum away while watching tv…often a rhythm part will form, to that pattern I'll start humming a tune…I then quickly record this into the computer (DELL PC from 2005…it’s shitty but does the trick) and start laying down a firm foundation…from there it could be anything from a completed song is formed, recorded in 20 minutes…or the bones are recorded and worked on for 2 months…but the beginnings always start on the couch…watching TV.

I record every song I connect to during the “forming” stage (sitting on the couch)…the ones that stick in my head…that I feel has an honesty about it, I release…I am notorious for recording songs quickly and just releasing them…I am learning to be more patient with the art I make.‍

Don’t worry about what others think…they’ll hate you either way…be honest with what you make…it will make you a far happier person…don’t let the fact you never took lessons for the instruments you wanna play…hold you back....that's three…learn to count.