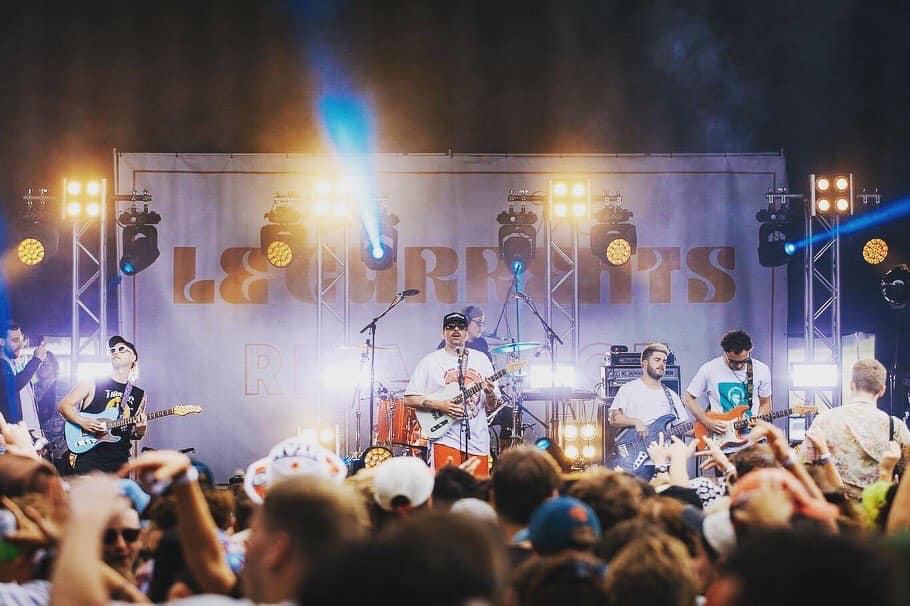 Summer Thieves are a Tamaki-Makaurau based band, who originally got together while studying in Ōtepoti. Adam Spencer took the time to tell us about his journey as a musician, and how Summer Thieves write and record their songs.

My family are pretty musical, a few cousins that are professional musicians who I always looked up to. My Dad was always playing music around the house and in the car, and that really shaped what I was into. My parents made me learn piano when I was young, until I picked up Saxophone and then Guitar.

I participated in Smokefreerockquest a couple of times in Dunedin. In year 12 I was in band called Beyond The Sun with a bunch of musicians from all over Dunedin. My bandmates went on to have pretty successful and cool careers in music and arts. Nadia Reid was the singer in that band who’s now a solo artist – she’s kept writing and playing music and been pretty successful! Others are in punk bands, produce music, and one makes rad music videos and plays in her own bands.

Three of us from Summer Thieves (Jake, Johnny, and Jarni) did Smokefreerockquest together while we were at King’s High School in Dunedin in a band called Thelonius.

Doing Smokefreerockquest taught us all the groundwork for what we still do… How to write, perform, make decisions together. This is stuff all bands have to learn and continue to work on when you’re working together. Writing and performing are skills no one ever masters, but you’ve got to be willing and keen to give things a try and keep learning.

I’m now based in Auckland and have been for the last 4 years. After high school I went to study Music and Business at the University of Otago, where we started Summer Thieves. I finished with a couple of degrees, one of which is Contemporary Music Performance on bass guitar. While I was studying we were playing most weekends in bars and at parties – sometimes twice or three times a weekend, even a night… We started out playing covers sets in bars, I think our first set was about 6 hours long and we only had 3 hours of music so just replayed the same music over and over, haha. After a while (few years) we stopped playing so many covers sets and focussed on our own music, putting on parties and shows around Dunedin and touring around the country in vans and eventually planes.

Over the last few years we’ve got to play some big stages, the summer festival season is our biggest time of the year. Pretty proud to say that we’ve played most of NZ’s biggest festivals and done sold out tours of the country but for me the proudest moments were in the early days when we were first getting to play with bands and artists that we’d looked up to for so long! Guys like Tiki Taane, Katchafire, Six60 – all who we met early on and couldn’t believe we were doing it, now most of those guys are good mates of ours.

Every song’s different but most start with a little progression and few lyrics from Jake or Johnny. Then it could come to the band and we’ll work around it, or it will go to into the studio with a producer and see what we can do with it in more of a pressured situation.

Our first album was written over a few years and we had all the songs written before we went into the studio. When we recorded we’d just got back from a tour of about 30 shows so we were tight! It was cool seeing the recording process of that and working with Tiki as a real producer, being advised and helped by someone who had so much experience. After we recorded everything he took them away and worked his magic. The writing and recording process for a band isn’t always as simple as just recording everyone’s parts and being done.

Our 2nd project has all been either written in the studio or we’ve just had a basic idea of a song before going in and seeing what we can do with it which has been a lot of fun.