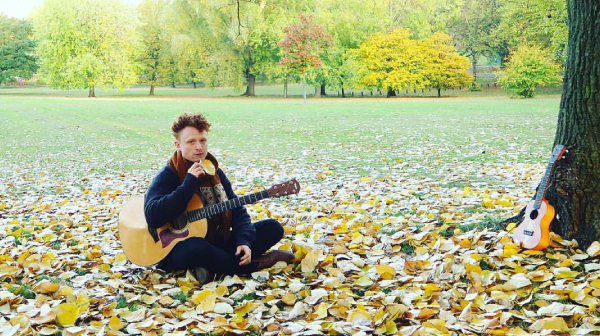 I spent my childhood and teenage years in Wellington, until I moved to Auckland when I was 18. Auckland was the ‘big smoke’ as far as I was concerned. There was always music around me from a young age. My mum is a great singer, my dad plays guitar and they used to play in folk bands around the different NZ folk festivals. I used to love going to all the festivals, watching the different acts and soaking in all of the different music. My brother has a great voice too, so together we would sing in car rides, and for family friends at parties.

I’ve played in bands since I was about 11 – my first band was called ‘Wipeout Fusion’. Fusion was part of the name because we figured what we were doing was ‘beyond genre’, which was strange considering our only two songs were ‘Weather With You’ by Crowded House and ‘Verona’ by Elemeno P. I then played in a band when I was 14 called ‘The Stray Dogs’. We hadn’t heard of the famous rockabilly band ‘The Stray Cats’. It was all a shitshow really. But music was always around from childhood into teenagedom.

I entered Rockquest throughout my High School years, which proved to be very motivating and inspiring for me. It’s probably a key reason why I chose to not go down the standard route of my peers, and instead try my luck getting out there and pursuing my dream of playing music full time. It hasn’t always been easy; but it is a decision that’s led me to tour all over the world, play music with some of my all time idols, and pursue what I’d say is my life’s calling, the best thing I have to give, and what makes me the most happy.

My musical taste has changed over time and continues to do so. It was all about Leonard Cohen, Radiohead, and Jeff Buckley when I was in high school – as well as a pretentious love of Jazz. Not that Jazz is pretentious, but my love of it certainly was. I liked the elitism of it. My fragile teenage ego liked to feel superior, and Jazz is certainly a more sophisticated kind of music than most.

However, I’ve always had a real love of just great songs and that’s been pretty consistent. I’m never too interested in guitar virtuosos or virtuosos in general for that matter. I’m far more interested in a great melody. I think it’s magic that just a couple of chords and a melody can reach into your heart and move you; bring you closer to yourself, and to everything else too. Like ‘Dreams’ by Fleetwood Mac. Basically just F and G the whole time, two chords, but so perfect, so transcendent and powerful, and so hard to replicate. Complicated music is easy, making something simple WORK takes real craftsmanship, I reckon.

Probably the best thing I’ve ever had the privilege of being involved in is being part of Neil Finn’s Dizzy Heights World Tour band back in 2014. It wasn’t just the buzz of getting to play with such a name, it was also that I deeply admire and respect Neil and his work. He showed me what is possible if you work like an absolute tyrant in the band room. He pushed us further than most people could get away with pushing. And it was utterly brilliant. We got to a level together that was so high up in the clouds and every piece of the puzzle was so important. It was a joyous and momentous time; so challenging and fulfilling. I’ll always remember it and feel grateful for it.

The hard part now is trying to beat that experience haha.

My writing process has always begun with chords, melody and vowel sounds (singing gibberish). Then I think about what the beat and bass line would be to compliment the song. I’m beginning now to experiment with different ways of writing though. Starting from a drum groove or bass line can take you in a totally different new and exciting direction, with less need for overcomplicated harmony, and I’ve been enjoying experimenting with that – flipping my process on its head.

I was part of APRA’s Songhubs last year and worked on a song with SJD called Buzzy, which I’ll be releasing as part of my album later in the year. We began with a little drum loop and then imagined the song from there. I think it’s good to mix it up and keep it fresh. When you start you go to what comes naturally to you, but if you just stay the same you lose that spark and fire. Creativity needs challenge and hardship, so if you can put yourself in a place where you don’t really know what you’re doing (which is what you have when you’re young and starting out), then you can reclaim some of that energy and creativity.

How do you pick which songs to release?

I’ve always found it difficult to know which songs to release because the music that comes out of me is quite varied, and doesn’t always reflect my other work. In the last year and a half I formed FRED which is a kind of happy psychedelic fun party band and I’ve found that this has made it easier. I can reflect the fun light hearted side of my work through FRED, and then the more introspective less dancey side through my solo work.

Generally I try to pick songs that reflect where I’m at in my musical journey and what I want to communicate in that particular moment. I also try to release songs that have had a good reception live, or that fans of mine really want to hear. That’s a great indication if you play a set and people come up to you afterwards and are commenting on the same song. Take care of your audience, it’s for them anyway, not you!

1. It’s not gonna play out the way you think it will, so arm yourself with as much knowledge as you can and be prepared to adapt and respond to opportunities in your peripheral. Don’t be disheartened when it doesn’t work out the way you want it too. Keep moving and keep learning; you will get there in the end.

2. Learn how to do as much of the process as you can by yourself. This is something I’m only starting to appreciate in the last year – getting my own recording gear and recording for myself rather than going into the studio. The less people you can rely on the better, because no one will work as hard as you for your music and vision, because, well, why would they? Empower yourself. This doesn’t mean don’t go into the studio or seek advice from industry veterans and professionals, you 100% should do that. But the more you are armed with your own knowledge or recording, how the industry works, etc, the easier you will convey your vision and move towards success.

GET YOUR FREE INFO PACKENTER NOW